Writing task 1 on the IELTS Academic test will require you to write a brief summary of at least 150 words when responding to a graph (bar or line graph) or table, chart, or process (how it works, how it is accomplished). The test tests your ability to identify and describe the most important aspects, describe and contrast data, recognize recurring patterns in the actual data, or explain an activity.

To do this, you have to translate the input into a paragraph and explain what you think the IELTS writing task is. Students are encouraged to practice and master the art of paraphrasing all through the test. If you do not, you could lose marks.

This overview should identify the primary trend or the most apparent piece of information from the chart or graph. Don’t include any details of the chart, but. First, you have to write down the things you can observe generally.

This is where you are able to explain the graph in greater specific. You must return to the data only and nothing other than that. You need to define the similarities and what’s different. Comparative structures can play a beneficial role here.

While it isn’t absolutely required, however, it is suggested you write a short conclusion. It should tie the entire essay together and may even contain a critique of the reasons these trends are happening. But be cautious not to get too far away from the subject.

There are five types of writing task 1, and you may get any one of it in exam.

The pie chart shows the amount of money that a children’s charity located in the USA spent and received in one year, 2016. 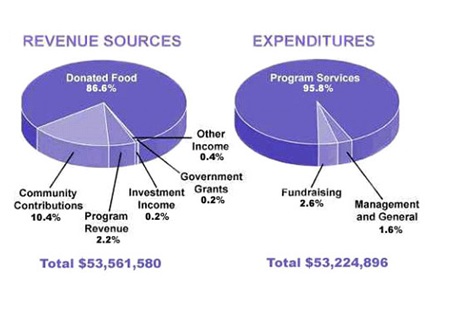 In particular, donations of food made up the majority of the income for the charity, with 86 percent. Similar to expenditures, one area was program services. It accounted for a majority of expenses, with 95.8 percent.

There were two other expense items: fundraising and management, and general accounting for 2.6 percent and 1.6 percent, respectively. The total income was $53,561,580. This sufficed to cover the expenses of $53,224,896.

The table shows the Proportions of Pupils Attending Four Secondary School Types Between 2000 and 2009.

At first, the percentage of pupils attending schools run by volunteers dropped from just under half to just 20% or one-fifth between 2000 and 2009. In the same way, the proportion of children attending grammar schools – barely one quarter – fell by half during the same time frame. In the case of special schools, the tiny percentage of pupils who attend this kind of school (12 percent) was also down, though not by much.

Below is a map of the city of Brandfield. City planners have decided to build a new shopping mall for the area, and two sites, S1 and S2 have been proposed. 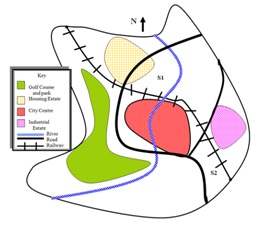 The most likely location for the shopping centre, S1, is just north of the city’s centre, just near the railway line that runs from the southern part of the city towards the northwest. If constructed here, it would be located next to a vast housing estate, providing convenience for those living on the estate and within the city’s central area. It will also be near the river that flows through the city.

The location in the southeast of the city, S2, is also located just close to the railway line and is close to the city center; however, it is next to the industrial area rather than housing.

It is located on a principal highway that traverses the city and is located close to both sites, which means that it provides an easy road connection to either site. There is a large golf course and park to the west of town that blocks the area from being used as a potential site.

The diagram illustrates the process that is used to manufacture bricks for the building industry.

The diagram shows the process the bricks are constructed for use in the construction industry. In all, there are seven phases of the process that begin with the excavation of clay and end with the delivery.

In the beginning, the clay used to create the bricks is gathered by an enormous digger. The clay is then put on a grid of steel and utilized to break it down into pieces. A roller is used to aid with this task.

After that, sand and water are then added to the clay. Finally, the mixture is transformed into bricks by either putting it in a mold or cutting it with a wire. Then, the bricks are placed into an oven and left to dry for between 24 and 48 hours.

The next stage is when the bricks undergo an ensuing cooling and heating process. They are then heated in a kiln to an average and later a high temperature (ranging between 200c and 1300c) which is followed by cooling in the chamber for two to three days. The bricks are then transported to their final destinations.

The line graph shows thefts per thousand vehicles in four countries between 1990 and 1999.

The graph shows the number of cars that were stolen per 1000 vehicles across four countries from 1990 until 1999. Overall, it is observed that thefts of cars were much greater within Great Britain than in the other three counties over the entire time period.

At the beginning of the year, car thefts in Sweden, France, and Canada had a similar pattern during the first five years. They all remained between 5-10 per thousand. The overall trend for France as well as Canada was a decrease in the number of cars that were stolen during the time, and both were at about 6 in 1999. However, Sweden experienced an upward trend, beginning around eight and reaching just under 15.

Incredibly, the rate of the theft rate of cars is a major issue in Great Britain, starting at 18 per 1,000, which was far over the average of other nations. The rate fluctuated over the following nine years, at a high of 20 per thousand thefts in 1996. Then, it ended the time slightly lower than the point at which it started, around 17 per thousand.

The bar chart depicts the gross domestic product that was generated by that of the IT and Service Industry in the UK between 1992 and 2000. It is calculated in percent. Overall, it is observed that both grew in proportion to GDP; however, IT continued to grow at a greater rate during this period.

At the start of the period in 1992, it was reported that the Service Industry accounted for 4 percent of GDP while IT was higher, with about 6 percent. In the following four years, numbers were more comparable, and both parts sat between 6 and 8 percent. IT was, however, higher overall but it did drop little from 1994 to 1996.

But, in the next three years, trends of both components were quite different. The proportion of GDP derived generated by IT went up quite a bit to 12 in 1998, and after that, close to 15 in 2000. However, it was the Service Industry stayed nearly the same, only increasing to 8 percent.

At the close of the period, the share of GDP generated by IT was nearly double that of the Service Industry. 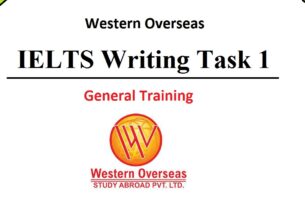 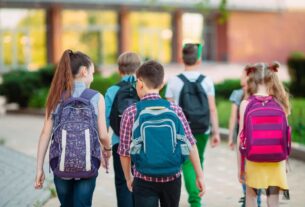 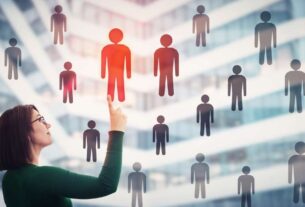 Essential functions of Human Resources which HR professionals must master